Have you ever wondered what you need to do to design a new medicine? There are many steps that take you from initially working out how a disease effects the body, to identifying the key components involved and finally designing and testing new medicines to tackle it that are both safe and effective. At the Centre for Medicines Discovery we’re really focused on the early stages of this drug discovery process – looking at the proteins that cause disease when they go wrong and trying to find small molecules that might bind to them to fix them (like finding the right key to fit in a lock). Then we need to see whether those molecules can be made any better and whether they might be suitable to turn into a safe medicine or turned into specialised biological tools to help other researcher with their work.

We really wanted to find an engaging and immersive way of talking about the different steps we take at the CMD as part of our research into making new medicines. We wanted to put people in the driving seat so they could imagine themselves as the scientists and really get to grips with just some of the problems we need to overcome to get a medicine anywhere near the clinic.

Making an escape room seemed like the perfect way to do this and so we started thinking about what “Escape the Room: Cure the Disease” might look like: developing a medicine to a theoretical disease, breaking it down into smaller problems and making each one into a fun game.

In October 2019 we applied to the first round of the Wellcome Enriching Engagement programme run by the University of Oxford and were successful in our bid. We started putting together our escape room and it went on it’s first outing at the SmashFestUK: Space Plague festival in Deptford in February 2020 where it was paired nicely with the main immersive experience looking many areas of science based around disaster management (in this case what do you do when a space rock hits Deptford and there’s a disease outbreak). We designed the escape room to be suitable for anyone from the age of 10 up (although both older and younger audiences seemed to have fun too!) and teams managed to beat the clock, unlocking the cure within the time limit.

Of course, then we were all hit with a global pandemic much closer to home and we had to rapidly change and adapt our plans, which had included taking the escape room to several more events over the summer. This was, of course, impossible so we had to find another way! With the support of the Enriching Engagement team and working with developers at Pocket Sized Hands, we were able to turn our escape room into an online version of the game that you can play from home! 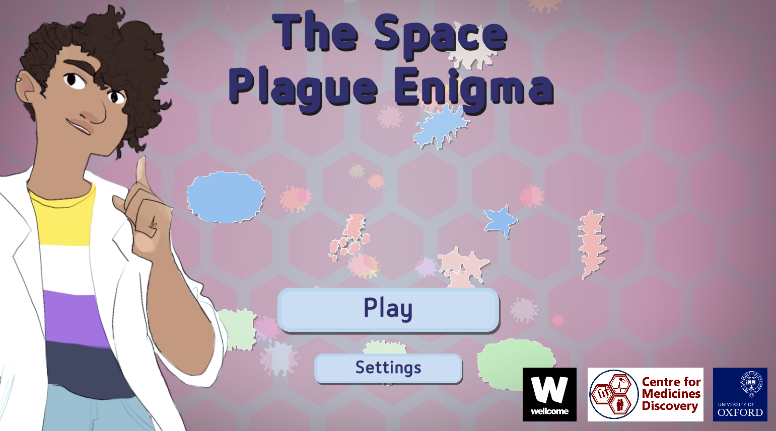 The Space Plague Enigma was launched in October 2020, was featured in the IF Oxford festival and is free and available to play now. It takes all the games we designed for the physical room and turns them into interactive puzzles that you can do against the clock! Each step that takes you closer to finding a cure also helps you understand the science behind what’s going on and hopefully tells you a bit more about the medicine discovery process.

It’s a long path from the first discovery of how a disease might work  to finally making a medicine you can safely use in patients (much longer than the 15 or so minutes it takes to play the game)– and understanding the steps on route can really help to understand why research takes such a long time and why we need to be so careful when designing something that is going to be used on people. Over the last few months of 2020, we’ve seen amazing progress on development of new treatments and vaccines against Covid-19 and there’s a real interest in knowing how these things are done and how we make them safe. With the ‘Space Plague Enigma’ we hope to introduce people to the science behind some of these questions in a fun an engaging way.

You can play the Space Plague Enigma here!

The game is designed for anyone aged 10 plus, takes around 15 – 20 minutes and can be done through a web browser using a point and click interface.

We’d love to get your feedback so tell us what you think here.

Many thanks to Margaret Young, Didi He, Liz Brown, Mathew Croker, Alison Howarth, Lizbe Koekemoer, Fiona Sorrell, Nanki Singh, Conor Wild, Thomas Christott and Tina Bohstedt for their work in designing and running the Space Plague Enigma in all its forms.